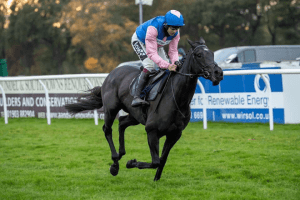 The unchallenged victory of Ucanaver in the bumper at Fontwell on Wednesday came as a pleasing endorsement of our decision to snap her up for £35,000 at the Cheltenham sales in the spring.

A nice, quality filly, she first came to my attention when she ran so well in finishing an excellent second to our own Coquelicot at Huntingdon in February.

It is obviously encouraging that the first four have all won since then. A month after Huntingdon I bought Ucanaver on spec when she appeared in the sales ring at Cheltenham and the newly formed Ifuwonner syndicate who now own her appear to have a bargain on their hands after her impressive debut for the yard .

She was in the van throughout, was clearly going best turning for home and readily pulled clear to win by twenty lengths from Flying Nun.

Aidan Coleman was very taken by Ucanaver who will possibly go to Cheltenham next for a Listed mares’ bumper in three weeks’ time.

Aramax gave her sire Maxios his first success at the Cheltenham Festival this year in the Boodles Juvenile Hurdle.

Earlier in the day at Fontwell Coquelicot’s jumping cost her dear on her first start over hurdles. She gave away ground at almost every flight, was soon towards the rear, yet showed plenty of character as she kept going to snatch second place in the closing stages.

Coquelicot has been a bit too relaxed at home and needs to sharpen up, but she is only four and we know the talent is there. We will work hard on her schooling and there is surely better to come from a filly I rate highly.

Tomorrow we have Lily the Pink, owned by the Wessex Racing Club, running at Lingfield in the 2m3½f (2m3f110y) Sky Sports Racing Sky 415 Mares’ Handicap Hurdle .  I’m looking forward to her first run of the season, and this seems a sensible starting point, taking on the Mares over this intermediate distance.

I’m hopeful that we’ll be running on nice ground which won’t ride too deep after todays rainfall, and I’m expecting a solid competitive performance, with our conditional Ben Godfrey taking off a useful 7lb.